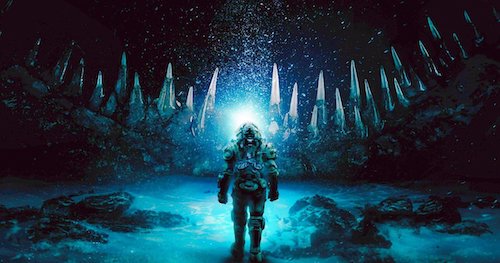 Underwater has all the makings of a January release. It’s a big studio horror movie with two stars who audiences will have heard of — Kristen Stewart and T.J. Miller — and a poster featuring a lone diver standing in front of a giant mouth full of teeth. Low and behold, director William Eubank — along with writers Brian Duffield and Adam Cozad — hold horror movie tropes close to their heart and revel in cliché. Where others may be annoyed by the constant riffs from sci-fi/horror classics of yore — everything from Alien, Leviathan, The Descent, and even a splash of Deep Blue Sea and The Meg — and that’s exactly what makes it work. It’s 95 minutes of constant fun with a dash of gore and its tongue planted firmly in cheek.

Seven miles deep in the Mariana Trench, Norah (Stewart) and Rodrigo (Mamoudou Athie) barely escape with their lives when what could be an earthquake wrecks their station. They start to make their way through the rubble, picking up Paul (T.J. Miller) along the way. Eventually, they meet up with Captain Lucien (Vincent Cassel), Liam (John Gallagher Jr.), and Emily (Jessica Henwick). The group hatches a plan to keep themselves alive, and try to make their way to their only chance of survival: the Roebuck station. Little do they know, that they aren’t alone, and there may be more to fear than just drowning or imploding.

At a scant 95 minutes, Underwater swims along at a quick pace. The station explosion seen in the trailer is literally the second scene and it’s non-stop from there. Claustrophobic, occasionally gory, intense, disorienting, and even humorous, Eubank makes the most of the material. There’s even a few chances for the audience to catch their breath and give the characters some room to develop. We also get a nice, expository opening credit sequence followed by a dizzyingly creepy descent to the ocean floor.

But don’t worry, the poster and trailer promise a creature feature and that’s exactly what we get. The cast keep things interesting with a good rapport — although it was kind of surprising to see the script kill off the black character first. There’s also some fun nods to other horror films sprinkled throughout and it never tries to be more than it is. What Underwater is, is a nice blast of horror fun from beginning to end that’s a quick escape from reality for those who know what they’re getting themselves into.
Posted by Cinenerd's Reel Voice at 9:16 PM