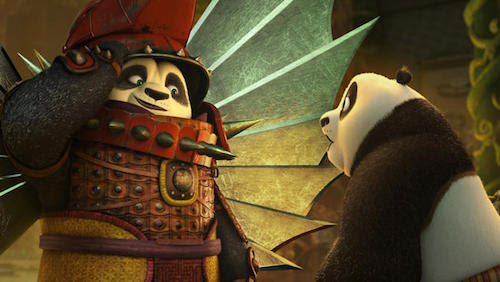 First thing’s first, don’t let the January release fool you, Kung Fu Panda 3 is not a terrible mistake. While it doesn’t quite live up to the heights of the first two — I never expected it to beat the greatness of Kung Fu Panda 2 — it still serves as a fantastic finale if they were to call it quits. Co-director Jennifer Yuh returns — joined by long-time DreamWorks contributor Alessandro Carloni — and brought back the same writers from the first two: Jonathan Aibel and Glenn Berger.

I’m not sure what’s missing, but it seems to be the same thing lacking in just about every feature since the animation studio was taken over by Twentieth Century Fox in 2013. Through The Croods, Turbo, and Mr. Peabody & Sherman — How to Train Your Dragon 2 and Penguins of Madagascar being the exceptions — the studio just hasn’t felt the same. While their outings have never been able to best Pixar through the years, they still aren’t firing on all cylinders. Kung Fu Panda 3 has been nearly five years in the making and gets the job done. Just don’t expect to watch it over and over again.

Catching up with the Dragon Warrior Po (voiced by Jack Black), he’s now faced with his most awesomest of tasks: to take over training for Shifu (voiced by Dustin Hoffman). As if that wasn’t daunting enough, his most nefarious villain yet arrives from the Spirit Realm in the form of Kai (voiced by J.K. Simmons). Kai has figured out how to literally harness kung fu warriors’ chi, encapsulating it in the form of a jade emerald, starting with poor Oogway (voiced by Randall Duk Kum). And there’s the return of Po’s real father, Li (voiced by Bryan Cranston), much to the chagrin of Mr. Ping (voiced by James Hong). Now, Po must find a way to defeat Kai and return peace to the land, while Kai will stop at nothing to gain all the power he can before the epic showdown against Po.

If the Kung Fu Panda films have one thing going for them, it’s consistency. Always full of heart, humor, and action, DreamWorks has got this franchise down pat. And perhaps therein lies the problem. After the film ends and start to think about what happened, you realize just how familiar the film really is. Plot mechanics be damned, there a few too many coincidences and plot holes this time around that you’d think they could have ironed a few of them out — especially considering how long it took for this one to make its way to theaters.

But don’t worry, it’s all in good fun. Plenty of slapstick abounds, and even with Guillermo del Toro returning to executive produce, it never gets too scary to upset the youngest viewers. This also may be the most childish of the series — KFP2 has now been concreted as the Empire Strikes Back of the franchise — but it does make plenty of nods to the first two installments to wrap things up nicely. Kung Fu Panda 3 may be more of the same, but in this case, that’s never a bad thing. It kicks off the 2016 animated features off to a great start. However, it might be forgotten after Finding Dory swims into our hearts this summer. Until then, what’s wrong with a little Po-sized fluff?
Posted by Cinenerd's Reel Voice at 5:59 PM No comments:

Blu-ray Review: “What Have You Done to Solange?”

Article first published as Blu-ray Review: Arrow Video Brings Massimo Dallamano’s Classic Giallo What Have You Done to Solange? to the U.S. on Blogcritics. 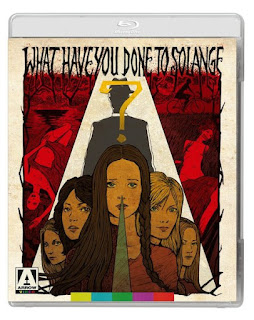 The giallo movie genre is synonymous with Dario Argento. The man basically invented the genre of young women being terrorized by a black-gloved killer while an amateur sleuth is on the case. As much as I love horror films, it wasn’t until after seeing Edgar Wright’s Hot Fuzz that it ignited my love for the genre.

While Argento may be the undisputed king, there are a few directors who managed to leave their mark as well. And now, Massimo Dallamano’s What Have You Done to Solange? has been given the near Criterion Collection-treatment, courtesy of the U.S. branch of Arrow Video. No longer in need of a region free player, now we can too can bask in the glory of some of the fantastic imports that have been exclusively available overseas.

In London, Enrico ‘Henry’ Rosseni (Fabio Testi) is spending the morning drifting along the riverbank with one of his students, Elizabeth (Cristina Galbo). Suddenly, their bliss is interrupted when Elizabeth has a terrible vision of a girl being murdered and, sure enough, a body is discovered not far from where they are. After Henry returns to the scene of the crime, he becomes a suspect under the watchful eye of Inspektor Barth (Joachim Fuchsberger). As the bodies mount, Henry becomes the prime suspect and must navigate his way through his loveless marriage to Herta (Karin Baal) and stay one step ahead of the killer to find out who’s behind the brutal schoolgirl slayings.

Arrow Video brings Solange to home video in a Blu-ray/DVD combo pack on a 50GB disc, framed in an aspect ratio of 2.35:1 with amazing results. No longer the byproduct of suffering the death of a grindhouse image, Solange has been cleaned up meticulously with spectacular results. While never being quite razor sharp, fine detail is on display in nearly every shot. Whether interior or exterior, it’s unlikely anyone has seen the film look as good as it does now. Nevermind the hair at the top of the screen at the 1 hour 18 minute mark.

Colors are nice and natural and there’s no sign of crush, aliasing, or even banding. Even the Original Italian Mono 1.0 DTS-HD Master Audio track is clean and crisp. The score by master Ennio Morricone also sounds as vibrant as one could hope. There are, of course, instances where the dubbing doesn’t quite match up, but that’s par for the course and is no reason to mark down the sound. An English DTS track is also available, with newly translated English subtitles for the Italian track and optional English subtitles for the deaf and hard of hearing for the English track.

While not quite reaching the heights of a Criterion disc, Solange does come with a wealth of special features. Three featurettes are included, featuring interviews with actress Baal “What Have You Done to Decency?” (13:38), actor Testi “First Action Hero” (21:17), and producer Fulvio Lucisano “Old-School Producer” (11:02). All of these vary in quality and information. Baal seems very dissatisfied with having anything to do with the production and takes every opportunity she has to cut it down. Testi focuses his discussion on his own career. While Lucisano name drops while sharing tidbits about working with Morricone — questioning how the man has not won an Oscar yet, something that could be in the works with his score for Quentin Tarantino’s The Hateful Eight — and his meeting with Tarantino himself who loves the film and counts it as one of the films that taught him what he knows about filmmaking.

A commentary with critics Alan Jones and Kim Newman sheds some fun light on the genre and the film itself. “Innocence Lost” (29:00) is an Arrow exclusive video essay from Michael Mackenzie who explores the themes of Solange, along with its two semi-sequels as part of the “Schoolgirls in Peril Trilogy,” a dissection of giallo itself, covering everything from its use of and lack of children to its obsession with killer priests. The film’s trailer (3:05) is included, along with a 27-page booklet featuring articles by Howard Hughes (“A Little Night Music: The Giallo Scores of Ennio Morricone”), Art Ettinger (“Camille Keaton: Solange and Beyond”), and a quick quip about the 2K restoration.

Chock full of everything anyone could want from a giallo film, What Have You Done to Solange? is another classic example of the genre and proves its staying power and influence on directors today. Sparing the audience nothing — from scythed vaginas to nubile schoolgirls showering while being spied on by peeping toms — Dallamano delivers a classic giallo with a fantastic video/audio presentation from Arrow Video, the true masters of restoring the macabre. What Have You Done to Solange? is a great example for anyone looking to dip their toes into something more than run-of-the-mill slashers. They just don’t make ’em like they used to.
Posted by Cinenerd's Reel Voice at 5:53 PM No comments: