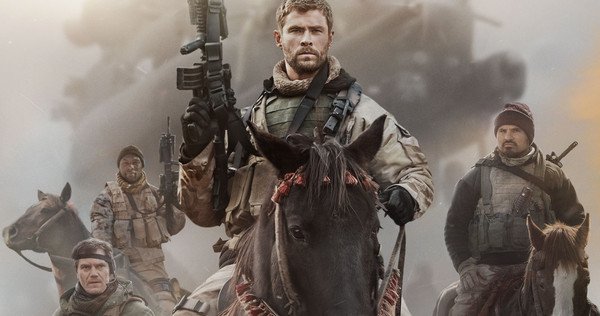 ** out of 5
130 minutes
Rated R for war violence and language throughout
Warner Bros. Pictures

Considering how important the mission was of the “Horse Soldiers” — the first Special Forces team sent to Afghanistan following 9/11 — it’s a shame 12 Strong is as dry as the Middle Eastern deserts. Danish director Nicolai Fuglsig never finds a spark through a bloated 130-minute runtime adapting Doug Stanton’s non-fictional Horse Soldiers.

It’s a shame considering Ted Tally — Oscar-winning Silence of the Lambs screenwriter — has his name attached, because he’s better than this. So maybe it’s Peter “Son of Sally Field” Craig who’s to blame. Or maybe it’s casting an Australian (Chris Hemsworth) to portray a US war hero in a film that’s preempted by a trailer for Clint Eastwood’s 15:17 to Paris where the real soldiers play themselves. Whatever the reason, 12 Strong never finds its footing and is already the year’s loudest Prozac alternative.

For those who don’t know the story, Task Force Dagger — made up of, but not limited to, Captain Mitch Nelson (Hemsworth), Chief Warrant Officer Cal Spencer (Michael Shannon), and Sergeant First Class Sam Diller (Michael Peña) — is sent to Afghanistan to join US Army Green Berets ODA 595 to take down the Taliban. Along the way they must join forces with General Abdul Rashid Dostum (Navid Negahban) of the Northern Alliance to do whatever they can to keep themselves alive.

The pace and length kills 12 Strong’s momentum. There’s no reason for this to be 130 minutes. Not a whole lot happens in it. Which is a shame because it’s being advertised with an emphasis on action. It wouldn’t be so bad if we ever cared about the members of Mitch’s team. Shannon and Peña fare the best, but that’s not surprising considering they’re two of the best character actors working today. It’s a shame 12 Strong is so boring because these were real people.

All intensity is thrown out the window if you know going in how it ends. It’s like the opposite of when you watch a movie being touted as “Based on a True Story” and then everyone dies. In this case, when you know everyone lives, there’s never any sense of urgency to their fates. And you’d be damned hard pressed to find anyone who can walk out of the theater and tell you who any of the rest of the team was or what they did. 12 Strong is in need of a serious jolt of adrenaline, as is, it’s another DOA January dump-month release.
Posted by Cinenerd's Reel Voice at 8:05 PM No comments: 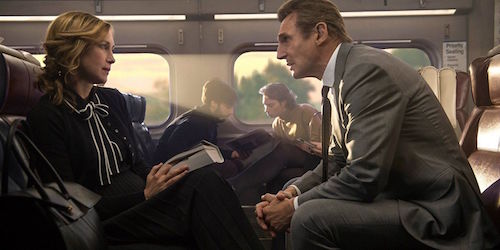 *** out of 5
104 minutes
Rated PG-13 for some intense action/violence, and language
Lionsgate

Poor Liam Neeson — that’s Neesons to you and me. Try as he might, every action film he’s in these days feels like a broken record. Truth be told, we can blame Christopher Nolan after casting him as Ra’s al Ghul in Batman Begins, because it was only three years later that the first Taken ushered in the last decade of Action Neesons we know today. Considering The Commuter is Neesons’s fourth collaboration with director Jaume Collet-Serra — after Run All Night, Non-Stop, and Unknown — it should come as no surprise if things feel overly familiar and plays out like a greatest hits album.

Michael MacCauley (Neeson) leads a typical, boring life. He loves his wife Karen (Elizabeth McGovern) and son Danny (Dean-Charles Chapman) and commutes to work as an insurance salesman. Until the day he’s laid off, boards the train, and gets swept up into a conspiracy thanks to a not-so-chance encounter with the mysterious Joanna (Vera Farmiga). Now, Michael has to decide if his ex-cop instincts can solve the game he’s set into motion trying to discover who on board is “Prinn” amongst a trainful of suspects.

Back in the ’90s, The Commuter would have been a surefire hit. Having waded our way through these waters before, now it just seems sillier than ever. Collet-Serra keeps the film chugging along, but takes things way too seriously as the screenplay — from Byron Willinger, Philip de Blasi, and Ryan Engle — ramps up the ridiculousness. Neesons performs as well as always, even if Collet-Serra seems to be losing his grip in the finale.

It doesn’t help that you can guess who one of the big baddies is from a mile away and how things are going to play out beat for beat as it comes to a close. The Commuter features one of the funniest homages to Spartacus ever put on film. The Commuter isn’t quite bottom of the barrel — it’s way too dumb to not have at least a little bit of fun — but it’s also far from good. The most unintentionally hilarious moments are “spoilers” so I’ll leave them to be discovered by interested parties. Those who want to board will find it a good enough time waster, but those expecting The Commuter to be something more akin to The Grey better keep their expectations in check.
Posted by Cinenerd's Reel Voice at 8:24 PM No comments: 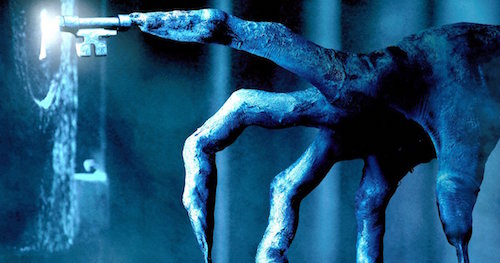 It’s disheartening to watch a series you love fall apart with a case of onset sequelitis. What’s even worse is when the series’ creator is the culprit. Try as writer Leigh Whannell might, he’s allowed his once terrifying Insidious franchise to quickly sink to direct-to-video quality with the fourth installment, The Last Key. It doesn’t help that James Wan only directed the first two chapters, but even Chapter 3 was better under Whannell’s own direction. Here, director Adam Robitel makes his sophomore film feel more like a freshman attempt with horrible editing, forced humor, and a laughably bad finale.

Kicking off in 1963, a young Elise Rainier (Ava Kolker) is living in a house filled with spirits. The family home is located on the grounds of the New Mexico State Penitentiary in the small town of Five Keys. Her mother Audrey (Tessa Ferrer) believes in Elise’s abilities, but her father Gerald (Josh Stewart) is content with trying to beat it out of her.

In 2010, Elise (Lin Shaye) is living with Specs (Whannell) and Tucker (Angus Sampson) when she receives a phone call from the terrified Ted Garza (Kirk Acevedo), who happens to be living in her childhood house; as Elise literally says, “that house was not a home.” Elise travels back to New Mexico to investigate one of the most insidious spirits she’s ever encountered, in spite of her estranged brother (Bruce Davison). But has brought along the help of Specs and Tucker, and discovers that her niece Imogen (Caitlin Gerard) can also astral project which comes in handy when the evil spirit tries to capture Elise in “The Further.”

If all this sounds familiar, it’s because we’ve been down this road three times before. Director Robitel is half content with keeping things straight forward — which is when the film works — but Whannell has garnished the script with the series’ worst jokes. Watching Specs and Tucker try to woo Elise’s nieces is not something we should ever have to sit through. It doesn’t help that this entry to the Insidious universe centers around side characters that work best as support. There is way too much Specs, Tucker, and Elise. They come off far better in the other films where they’re called upon for assistance, but none of them have what it takes to carry a film.

The scares are of the expected variety. The camera pans across a dark room and something creepy passes by then it cuts back and it’s gone. Unfortunately, Robitel also relies far too heavily on LOUD NOISES! to scare the audience. It’s the oldest trick in the book and it’s extremely annoying to find this dead horse getting beat to death in an Insidious film. The new monster is also showed way too much. It’s what we don’t see that’s scariest, only proving how lacking producer James Wan’s input was. Even Whannell seems to be on autopilot, probably due to him writing/directing another upcoming Blumhouse horror film. He’s also managed to continue muddling the film’s timeline.

It saddens me that Insidious: The Last Key hopefully lives up to its title and this will be the last. At least we still have the first two films to remind us just how good things used to be.
Posted by Cinenerd's Reel Voice at 11:45 AM No comments: