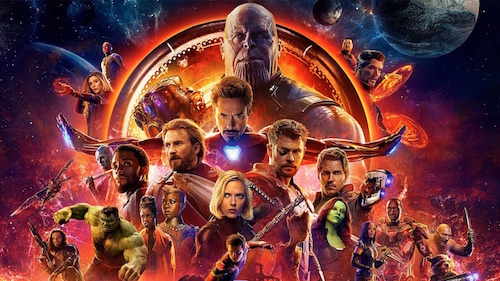 ***** out of 5
149 minutes
Rated PG-13 for intense sequences of sci-fi violence and action throughout, language and some crude references
Marvel Studios

*Links to the previous MCU films can be found after the review excluding Iron Man and The Incredible Hulk as I was not reviewing at the time.

Ten years, 18 films, and it all comes down to this… Well, half at least. Avengers: Infinity War is a celebration and culmination of the last decade. Combining an entire universe — it is called the Marvel Cinematic Universe for a reason — of comicbook superheroes and spanning years of anticipation, can Earth’s mightiest heroes stand up to the hype? Unsurprisingly, the answer is yes. Infinity War delivers across all fronts with spectacular action, huge laughs, and an aching heart. But the Russo brothers (Joe and Anthony) send phase three out with a spectacular bang.

Picking up after Thor: Ragnarok with Thanos (Josh Brolin) taking over Thor’s (Chris Hemsworth) ship of Asgardian castaways, we find a battle of wits as Thanos threatens to kill Thor in order to get his giant hands on the Tessaract (the Space Stone) from Loki (Tom Hiddleston). Thanos plans to gather all six Infinity Stones — the rest being the Mind, Soul, Power, Time, and Reality Stones — in order to control the universe. He also plans to wipe out half of Earth, bringing together the Avengers, and a slew of help, to try to stop his evil doings.

No movie could attempt the kind of epicness the Russo brothers manage to bring to the screen. With every film in the collective there’s another piece of the puzzle. And the end game is finally here. The cast can play these characters in their sleep — aside from Olsen’s disappearing accent — but never come across as bored. The camaraderie works wonders considering screenwriters Christopher Markus and Stephen McFeely are handling so many characters from so many movies with so many different tones. It never feels as much like channel surfing as it could and also never feels like a greatest hits collection either. Every character is given something to do and no one goes to waste.

Is this a perfect movie? That would have been impossible. Things slow down toward the middle causing a moment or two of restlessness, but then it’s back to full throttle and hits the gas again. The 149 minute runtime flies by. The cliffhanger ending will make your jaw drop making the most hardcore MCU fans ask, “Is this real life?” This is the Marvel movie that’s going to be dissected and analyzed for the next year while we wait out for the second half — filming is already completed and we don’t even have a title yet! You’ll find no spoilers here, only the biggest jerks would commit that crime. But, no one is going to leave Avengers: Infinity War without a smile on their face, a tear in their eye, and distress on their minds.

Make sure to stay through the end credits for a single stinger. Anyone needing to make a restroom run during the credits is safe to do so. Also make sure to see it in IMAX, it was filmed with IMAX cameras and unfortunately, our press screening was framed at 2.39:1 in a scope ratio causing a lot of the image to go missing. It’s a huge movie that demands to be seen on a huge screen. 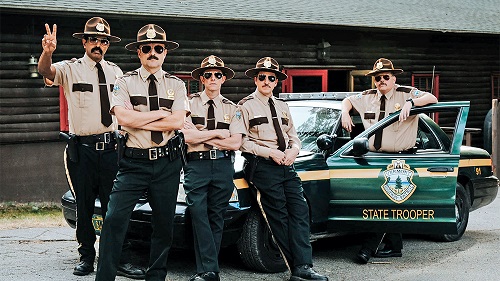 **** out of 5
100 minutes
Rated R for crude sexual content and language throughout, drug material and some graphic nudity
Fox Searchlight

Broken Lizard may not be a household name, but their movies are cult favorites. They struck comedy gold when Super Troopers finally made it to theaters back in 2002. And the laughs continued with Club Dread (their best movie) and Beerfest (their funniest). But Broken Lizard Industries went severely awry when Jay Chandrasekhar handed the reins over to Kevin Heffernan for The Slammin’ Salmon (their worst).

So, after a nine year theatrical hiatus, how does Super Troopers 2 stack up? Well, the best thing they did was give control back to Chandrasekhar.

Our favorite Vermont highway patrolmen — Thorny (Chandrasekhar), Farva (Heffernan), Mac (Steve Lemme), Rabbit (Erik Stolhanske), Foster (Paul Soter), and Captain O’Hagan (Brian Cox) — are back! After being fired years ago involving the death of Fred Savage, it’s time to bring the gang together again. Turns out, the Canadian/Vermont border isn’t where everyone thought it was, and now, the boys are sent to patrol the new American property. But not if a trio of Canadian mounties — Podien (Hayes MacArthur), Bellefuille (Tyler Labine), and Archambault (Will Sasso) — and Mayor Guy LeFranc (Rob Lowe) have anything to do with it.

Shenanigans is the name of the game for any Broken Lizard movie and Super Troopers 2 does not disappoint. I’m sure there will be some who will be let down that this is the best they’ve come up with after 17 years — the plot is exactly the same, just with more Canada jokes, eh — but damn if this isn’t hilarious from start from finish. The whole cast slips right back into their roles, helping to ensure maximum hilarity. Cox even gets to be funnier this time around.

Does everything work? It’s a comedy, so of course not. But there are huge laughs and plenty of chuckles. You’re bound to leave with at least a smile on your face. Both Canada and America get blasted with Broken Lizard’s patented slapstick/wordplay, and while it could never be perfect, it also never feels like it should have been straight to video. The boys still have every bit of charm and with Chandrasekhar back at the helm, the time for more Broken Lizard films is meow.
Posted by Cinenerd's Reel Voice at 6:13 PM No comments: 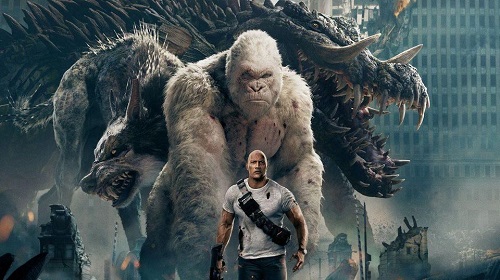 ** out of 5
107 minutes
Rated PG-13 for sequences of violence, action and destruction, brief language, and crude gestures
Warner Bros. Pictures

When a movie is based on an ’80s video game and stars The Rock, you expect it to be big, dumb, fun. Unfortunately, all we get out of director Brad Peyton’s (San Andreas) Rampage is just big and dumb. Being a child of the ’80s, I was super excited to see my favorite Midway Games’ humanoid monsters wreaking havoc with Dwayne Johnson leading the human brigade to stop them. Rampage is another shining example — the other Pacific Rim Uprising — of how horribly things go awry when you spend too much time on characters before getting to the goods.

After the explosion of space station Athena1, Project: Rampage proves it works by infecting a grey wolf named Ralph, a crocodile named Lizzie, and primatologist Davis Okoye’s (Johnson) beloved albino gorilla friend George, with a mutagenic serum. Now, the three animals are growing bigger, and more aggressive, and only Davis — along with Dr. Kate Caldwell (Naomie Harris) — can stop the genetically edited creatures from destroying the world. Militant Burke (Joe Manganiello) fails to take down Ralph. This is much to the chagrin of Claire and Brett Wyden (Malin Akerman, Jake Lacy), the brother/sister responsible for Project: Rampage’s “success.”

I was pretty pumped to witness the monster carnage unfold while Johnson went along for the ride quipping one-liners. What I didn’t expect was a film filled with cartoon villains — Lacy is usually very likable but shows off his worst acting here. And a gorilla fist pumps, flips the bird, and throws sexually explicit sign language around. It feels like Peyton has fallen prey to the Michael Bay School of Directing, right alongside Pacific Rim Uprising’s Steven S. DeKnight. It took four writers (Ryan Engle, Ryan J. Condal, Adam Sztykiel, and somehow Carlton Cuse) to cobble together something that resembles a storyline. But the actors — especially Johnson — look super exhausted being constantly overshadowed by the CGI.

At least one silver lining helps it stand above PRU in that it doesn’t take 80 minutes to get to the rampage. By the finale it sinks into the same trappings where they believe more is better. Less doesn’t always have to be more, but it helps to care one iota about at least one character in a movie filled with giant creatures smashing buildings. Usually Johnson is more than enough to be that character, but when even he looks like he’s about to fall asleep from Peyton’s slow as molasses pacing, you’ve got bigger problems. Rampage is strictly made for today’s gamers where everything needs to be fast and shiny. Fans of the original can save their quarters and move along to something else.
Posted by Cinenerd's Reel Voice at 7:42 AM No comments: 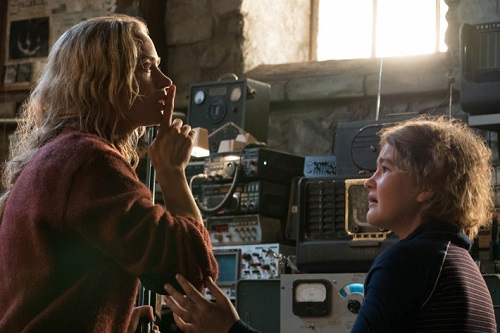 Horror classics are few and far between. When they do happen, they take us by surprise. With A Quiet Place, director/star/co-writer John Krasinski — yes, Jim from The Office — delivers an unrelenting thrill ride. Showing exactly what one can do with so little, A Quiet Place sets out to scare the pants off audiences and succeeds brilliantly. Co-starring alongside wife Emily Blunt for the first time, Krasinski and company have made the year’s first great horror film and it’s gonna be tough for anyone else to outscare this one.

The Abbotts are not having the best 383 days. Dealing with a creature invasion is bad enough, but they still have yet to move on after their youngest, Beau (Cade Woodward), is killed. Secluded in a silent world — the creatures hunt by sound — Lee (Krasinski), wife Evelyn (Blunt), Regan (Millicent Simmonds), and Marcus (Noah Jupe) have to make sure they don’t fall prey. Lee spends his time trying to make hearing aids for Regan (who is deaf), while everyone else helps soundproof a panic room. Before long, the creatures come calling as the Abbotts are plunged into a fight for their lives like never before.

A Quiet Place  is thrilling, exciting, scary, terrifying, and emotional. Krasinski — and co-writers Bryan Woods and Scott Beck — takes a barebones idea and crafts a stunning horror achievement we don’t see the likes of very often. There’s no big twists to worry about, but there are huge scares. Krasinski leaves you breathless with an amazing climax that ends exactly where it should. Filled with fantastic acting, impeccable direction, and breathtaking set pieces, by the time it’s over you’ll wonder when you last took a breath. A Quiet Place exceeds the hype as a new horror classic has been born.
Posted by Cinenerd's Reel Voice at 7:29 PM No comments: