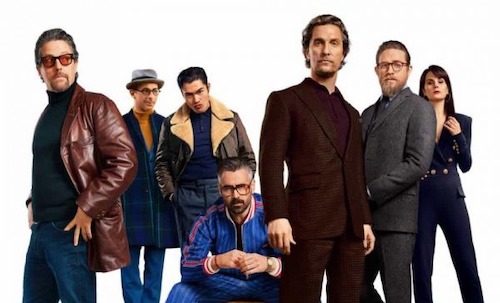 **** 1/2 out of 5
113 minutes
Rated R for violence, language throughout, sexual references and drug content
STX Films

Article first published at The ReelPlace.com

It’s hard to believe Guy Ritchie’s Lock, Stock and Two Smoking Barrels came out 20 years ago. Since that time, Ritchie has certainly proved himself to be a man of many hats. There’s the good — Lock, Stock, RocknRolla, both Sherlock Holmes, The Man from U.N.C.L.E. — the bad — Snatch and King Arthur: Legend of the Sword — and the ugly — Revolver and Swept Away. He also directed the underrated live action Aladdin. For those who like their Ritchie pure and uninhibited, he’s gone back to the basics with The Gentlemen — one of his best films yet.

Mickey Pearson (Matthew McConaughey) is the reigning king of weed in the UK and wants to retire. He’s in the midst of accepting a $400 million buyout from Matthew (Jeremy Strong) when his right hand man, Ray (Charlie Hunnam), gets paid a visit by tabloid photographer — and now aspiring screenwriter — Fletcher (Hugh Grant). Fletcher offers Ray the plot of a lifetime. Rife with powerful wives — Mickey’s, Rosalind (Michelle Dockery); scheming gangster underbosses — Dry Eye (Henry Golding); Fletcher’s own vengeful editor, Big Dave (Eddie Marsan); and Coach (Colin Farrell), all trying to get their hands on the prize: Mickey’s empire.

If there’s one thing Ritchie knows, it’s sudden bursts of violence, hilarious dialogue, and twisty plots. He’s always been a pseudo Tarantino from across the pond, but that’s not a slight in the least. The Gentlemen is definitely one of his most polished. Ritchie has found a way to keep exposition — which could have been tedious and repetitious — going for an entire film here. Then there’s Grant and Farrell stealing every scene. McConaughey does an amazing spoof of his onscreen persona — the opening scene feels like there’s a Cadillac commercial attached — and this is the most enjoyable Hunnam has been since Pacific Rim (maybe even since Undeclared).

Ritchie can’t help but get a little indulgent here and there. Thankfully, it somehow all makes sense by the end, extra kudos there. It’s Ritchie’s version of a crowd-pleaser melded on top of his films from yesteryear and it winds up a perfect concoction. While some may find the violence off-putting, they probably shouldn’t be seeing a Guy Ritchie movie anyway. This is pure Ritchie from start to finish and it’s about time the old chap finally got back to his signature style.
Posted by Cinenerd's Reel Voice at 9:00 PM