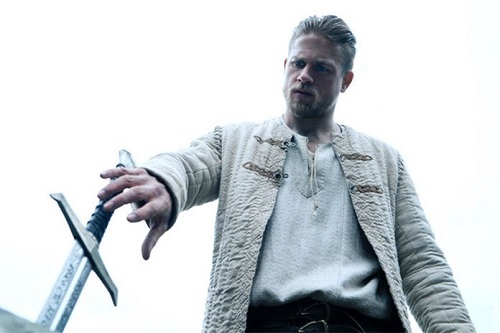 ** out of 5
126 minutes
Rated PG-13 for sequences of violence and action, some suggestive content and brief strong language
Warner Bros. Pictures

In the wastelands of Hollywood reboots, remakes, and reimaginings, Guy Ritchie’s King Arthur: Legend of the Sword certainly falls at the bottom of the heap. I figured this could go either way once Ritchie was attached, but I had higher hopes when I saw he had a hand in the screenplay. Maybe that’s where things went awry. While Antoine Fuqua’s 2004 King Arthur tried its hand at being too realistic, Ritchie takes the exact opposite approach.

This version of the legend infuses itself with horrible acting, bad CGI, no sense of fun, a plodding pace, and a cameo from The Little Mermaid’s Ursula and her Ladies of the Lake. Warner Bros. has a catastrophe on their hands, and judging by a pretty empty theater during the screening I attended, I cannot fathom who this King Arthur was made for. It’s too caught up in the supernatural for hardcore Arthur fans and too boring for anyone else with a pulse to make it out without catching a few zzzs before the credits finally roll.

While it feels convoluted, it’s really quite simple. Uther (Eric Bana) has just defeated the evil Mages — that’s magician, wizard, or sorcerer to you and me — and tries to allow his wife Elsa (Katie McGrath) and Young Arthur (Zac and Oliver Barker) to escape. Just wouldn’t you know it, the Mage Supreme winds up killing Arthur’s mum and pa and he is swept away to be raised by the common folk. Meanwhile, Uther’s brother Vortigen (Jude Law) has taken the thrown after Uther is slayed by the same Mage who killed mommy dearest, but the tide has lowered revealing a magic sword in the stone sending everyone into a frenzy to pull it from it’s resting place.

Once Arthur (Charlie Hunnam) is finally old enough to realize his destiny, he sets out to claim his rightful place as King with his band of merry men, err, Knights of the Eventual Round Table — Wet Stick (Kingsley Ben-Adir), Back Lack (Neil Maskell), Bedivere (Djimon Hounsou), Percival (Craig McGinlay), Kung Fu George (Tom Wu), oh, and Bill! (Aidan Gillen) — and a Mage (Astrid Bergès-Frisbey) of his own in tow.

If there’s one thing made clear, it’s that Disney is still the winner of the King Arthur adaptations. With no Merlin or sense of humor in sight — at least not after the first half hour — all audiences are left with are A Knight’s Tale outcasts with just enough rapport to make you wish the film was about them and not the boring Hunnam’s version of Arthur. There are so many issues with the film, most of them spoilery, so it’s really hard to tell where to lay blame for this fiasco. There apparently is an audience for the film based on some of my colleagues’ reactions. This King Arthur is not just one of the worst, it’s also one of Guy Ritchie’s worst. And this is the man who made Swept Away and Revolver! That should be just about all you need to know to make anyone fear stepping foot into a theater showing this waste of two hours. You can’t blame Guardians of the Galaxy Vol. 2 for its imminent demise, the film is every bit as bad as it looks, if not worse.
Posted by Cinenerd's Reel Voice at 9:13 PM